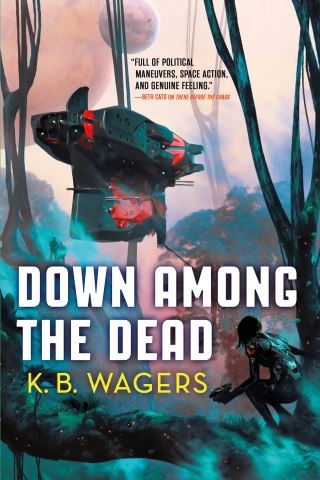 Down Among the Dead

Gunrunner empress Hail Bristol must navigate alien politics and deadly plots to prevent an interspecies war, in this second novel in the Farian War space opera trilogy.
In a surprise attack that killed many of her dearest subjects, Hail Bristol, empress of Indrana, has been captured by the Shen -- the most ruthless and fearsome aliens humanity has ever encountered. As she plots her escape, the centuries-long war between her captors and the Farians, their mortal enemies and Indrana's oldest allies, finally comes to a head.
When her captors reveal a shocking vision of the future, Hail must make the unexpectedly difficult decision she's been avoiding: whether to back the Shen or the Farians.
Staying neutral is no longer an option. Will Hail fight? Or will she fall?
For more from K. B. Wagers, check out:
The Farian War
There Before the Chaos
Down Among the Dead
The Indranan War
Behind the Throne
After the Crown
Beyond the Empire