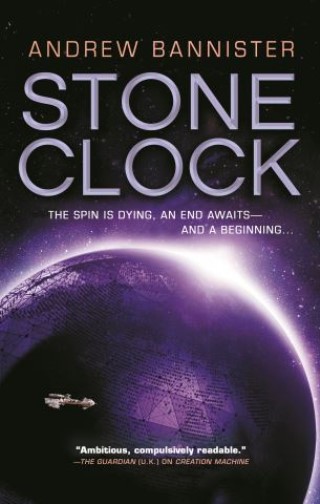 A hundred millennia has passed since the events of Iron Gods. The Spin is dying, and its few inhabitants live unknowingly in the relative paradise of one of hundreds of Virtual Realities—'vrealities'—or they scrape a living out of remains of the real world.

As the vrealities drain the last resources of the Spin, a rebellion which could kill millions sparks and gains momentum.

In a remote star system, an ancient insectoid called Skarbo the Horologist has studied The Spin for several lifetimes. Himself near to death, he makes a final journey to look his last on the object of his studies. There he learns of the artificial system's past, the real nature of the vrealities—and the part he has to play in theirfuture...

At the Publisher's request, this title is being sold without Digital Rights Management Software (DRM) applied.

Andrew Bannister: ANDREW BANNISTER grew up in Cornwall and studied Geology at Imperial College and went to work in the North Sea before becoming an Environmental Consultant. He is active in voluntary work, focusing on children with special educational needs. Andrew is the author of the Spin trilogy (Creation Machine, Iron Gods, and Stone Clock).